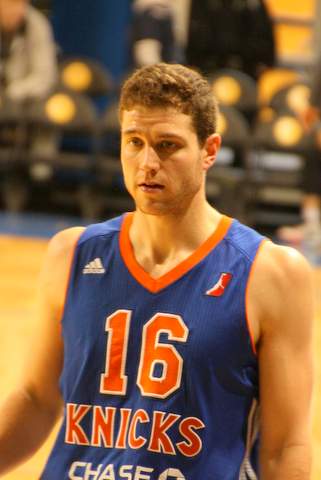 While his streak of 50-point games ended at two, former BYU guard Jimmer Fredette put on another memorable performance as the Shanghai Sharks outlasted the Xinjiang Flying Tigers 110-104 on Sunday.

Things got a little close in the final few minutes but @jimmerfredette was able to push the #ShanghaiSharks to another victory! @thejimmerwatch pic.twitter.com/rcrnOcJzYa

Fredette scored 18 straight points in the fourth quarter on his way to a 35-point night. He also added seven rebounds and four assists in 40 minutes of play. He got plenty of help from Nick Minnerath who scored 42 points on the strength of a 9-for-12 shooting display from beyond the arc.

After a slow start to the game, Fredette got things rolling in the second quarter with 12 big points as the Sharks took a one-point lead at the half. Following a five-point third quarter, including a three from the top of the key, he really turned it up in the fourth to take over the game.

He started with a pair of scoop lay-ups before coming off a screen and burying a tough 3-pointer. After hitting an impossible bank-shot from 20 feet out that didn’t count, he knifed through the defense and got to the rim where he finished with another lay-up. He then found the range from beyond the arc again and converted on his second three of the quarter, and third of the game.

He added a baseline lay-up on a tough drive, followed by a pair of free throws, before he finished things off with a floater from 15 feet out to clinch the game.

Darius Adams did his best to help the Flying Tigers keep pace in the tough loss. He finished with 46 points on 14-for-36 shooting from the field and 10-for-10 from the foul line while adding eight rebounds and seven assists.

Shawn Long chipped in with 17 points and 12 rebounds for Xinjiang while Changdong Yu registered 11 points, four rebounds and a pair of assists.

Hanchen Luo added 10 points and six rebounds while Wei Lo contributed 10 points on 3-for-5 shooting from the field for the Sharks who won their fourth game in a row to improve to 5-2 on the year.

Up next for Fredette and Shanghai is a trip to Beijing to face off against the Ducks who are 4-3 on the season after a 113-105 loss to the Beikong Fly Dragons.