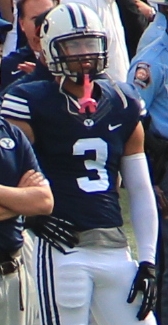 Kyle Van Noy and Brandon Davies had massive performances on Sunday as their respective teams did what they needed to do to come away with big wins.

Van Noy had one of the best games of his NFL career as the New England Patriots came from behind to knock off the pesky New York Jets, 24-17.

Not only did Van Noy tie for the game high in tackles with seven, but he also came away with two and a half tackles for loss and two huge sacks to help limit the Jets’ offense.

The first sack came on a third-and-2 in the second quarter when he hunted down Josh McCown who had escaped the pocket and took him down for a 6-yard loss.

The second sack was at a much more crucial part of the game with the Jets marching as they looked for the tying score. This time Van Noy broke free and tracked McCown down from behind for another 6-yard loss that forced the Jets into a fourth-and-16.

It was a play that Michael Hurley of CBS Boston listed as one of seven plays that won the game for the Patriots.

Speaking of the play, Hurley wrote, “The Jets actually converted a fourth-and-12 and were threatening to score that tying touchdown on the final drive of regulation. But Kyle Van Noy ensured that wouldn’t happen.”

His play was good enough to earn him the Patriots Teammates of the Game with Malcolm Butler, who had two takeaways in the win.

2 sacks for @KVN_03. 2 takeaways for @Mac_BZ.@budlight teammates of the game: pic.twitter.com/qYNMi1SEmE

It was a game that Van Noy dedicated to teammate Harvey Langi and Langi’s wife who were injured in a car accident.

Get on the New England Patriots bus with linebacker Kyle Van Noy (@KVN_03) on the way to MetLife for a big game against the Jets. #NEvsNYJ pic.twitter.com/ejU2vWzGkf

On the season, Van Noy has 42 tackles, including 33 of the solo variety while adding three and a half sacks.

Davies wasn’t playing in as big a spotlight as Van Noy, but still provided a great game as Zaligiris Kaunas improved to 6-1 in Lithuanian League play with an 85-67 win over Siauliai.

In the 18-point victory, Davies finished with 15 points on 7-for-12 shooting from the floor and 1-for-1 from the foul line. He added a team-best seven rebounds, including four on the offensive end to go along with three steals, two assists and a block in just 20 minutes of action.

His performance earned him recognition as one of the 10 best games played in the Lithuanian League in week 7 by Eurobasket.com.

Other Cougs in the news

Daniel Sorensen also put up some big tackle numbers in a losing effort as the Pittsburgh Steelers handed the Chiefs their first loss of the season, 19-13.

In the setback, Sorensen totaled eight tackles, including four solos and a tackle for loss.

He now has 32 tackles on the season, including 29 in the last five games.