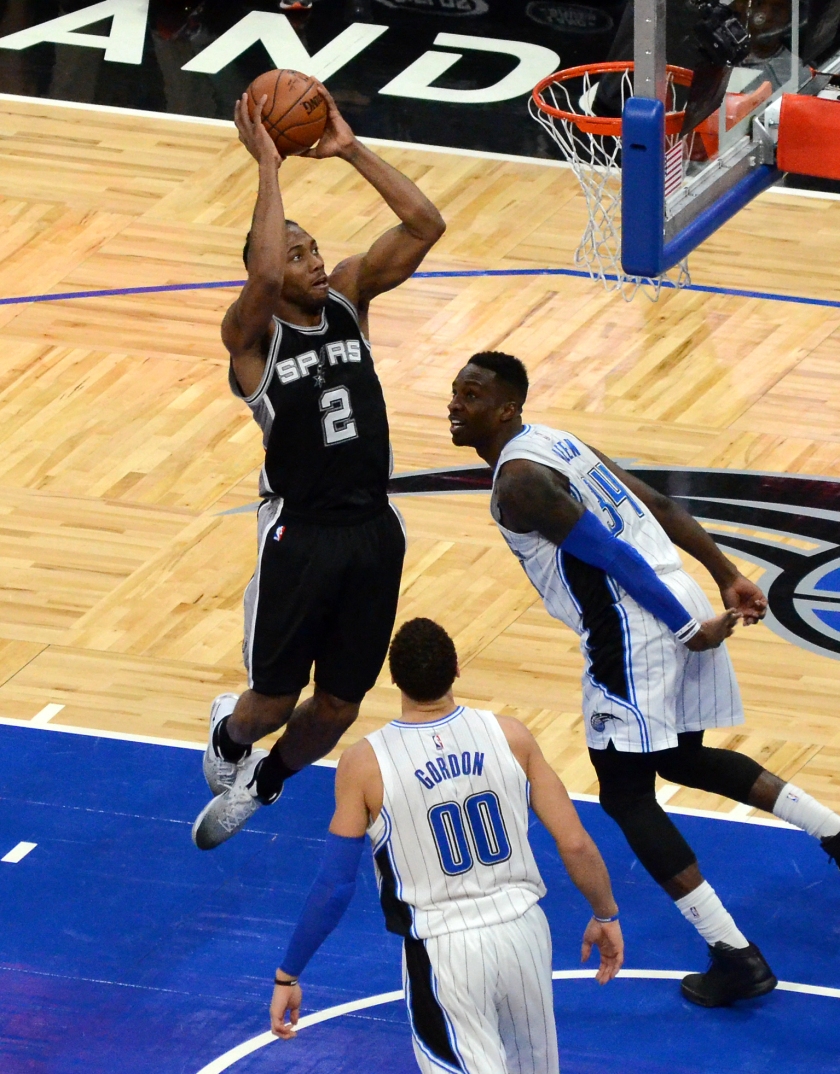 The NBA is full of big stars. Players that even people who aren’t fans of the game know about.

There are players who are household names, who electrify the crowd and who stuff the stat sheet. But it isn’t always those guys who help their teams win the most games. After all, the game is played on both ends of the floor and you need to be able to play defense to win championships.

The top players have figured out that they need to get it done on offense and defense to ever truly be considered elite. This list is the best-of-the-best of those players, the ones who play hard on both ends of the floor and can dominate a game even when their shots aren’t falling.

Here is my ranking of the best two-way players in the game today.

All advanced statistics from Basketball-reference.com.

Duncan isn’t even close to the player that he once was. While he is minutes and impact on the offensive end are down, he is still one of the elite team defenders in the game and the backbone of an impressive San Antonio defense. This year was no different as he finished first in defensive plus/minus at 4.97, and second in defensive rating.

A higher spot on this list would have been secured if not for the drop in his offensive game. He averaged a career-low 8.8 points on 48.8 percent shooting while handing out 2.7 assists as a complementary piece to LaMarcus Aldridge and Kawhi Leonard.

Horford is one of the few big men in the game today who is a complete player. He is a very efficient offensive player who has range to the 3-point line and can distribute the ball. He averaged 15.2 points on 50.5 percent shooting from the floor and 79.8 percent from the free-throw line while handing out 3.2 assists.

On the other end of the floor, he was top 20 in defensive rating and defensive box plus/minus and top 10 in defensive win shares for one of the top teams in the East.

While Rudy Gobert gets most of the headlines for his defensive prowess (and for good reason), Favors is the most well-rounded big man on the Jazz roster. He was in the top 20 with a player efficiency rating of 21.6 after he averaged 16.4 points on 51.5 percent shooting from the floor.

One the other end of the floor, he finished in the top 20 in the league in both defensive rating and defensive box plus/minus.

While always an impressive offensive performer, Gasol has taken huge strides on the defensive end since arriving in Chicago. Even though his numbers on offensive took a dip, he still had a good year, averaging 16.5 points on 46.9 percent shooting while handing out a career-high 4.1 assists.

Defensively, he finished in the top 20 in rating and win shares, while finishing fifth in blocks per game, sixth in rebounds per game and sixth in defensive box plus/minus.

Westbrook has turned into one of the most complete players in the league. While he has always been a terror on the offensive end of the floor, he made huge strides defensively this season now that he didn’t have to focus on carrying the load without Kevin Durant.

He finished third in the league in player efficiency rating after he averaged 23.5 points on 45.4 percent shooting from the floor while dishing out 10.4 assists. On the other end of the floor, he finished fifth in the NBA in steals (2.0), while landing 12th in defensive win shares and 17th in defensive box plus/minus.

Millsap’s game has grown leaps and bounds since landing with the Atlanta Hawks three seasons ago. He has developed a serviceable 3-point shot to have a more well-rounded offensive game while doing all the little things on both ends of the court. He had another solid offensive campaign, averaging 17.1 points a game on 47 percent shooting

His greatest growth this season came on the defensive end where he took over the role of defensive stopper from the departed DeMarre Carroll and didn’t miss a beat. He finished fifth in the league in defensive player of the year voting after averaging 9.0 rebounds, 1.8 steals and 1.7 blocks a game. He also finished fourth in defensive rating, third in defensive box plus/minus and first in defensive win shares.

While his greatness as a shooter is well-documented, one thing that often gets overlooked is his value on the defensive end of the floor. He is a terrific on-ball defender and a solid contributor on one of the best defensive teams in the league.

On offense, he averaged 22.1 points a night on 47 percent shooting from the floor, including 42.5 percent from beyond the arc. On defense, he produced 2.6 win shares.

While his numbers aren’t as impressive as they once were on the defensive end of the floor, he is still a good one-on-one defender while carrying the load on the offensive side of the ball. He averaged a career-high 20.9 points on 45.5 percent shooting while dishing out a career-best 4.8 assists.

After floating around the basketball world for a couple of year, Whiteside has made a huge impact on the NBA since landing with the Miami Heat. He is one of the elite shot blockers and rebounders in the game today as well as a very efficient player on the offensive end.

Aldridge was a welcome addition to an already impressive Spurs lineup. While his scoring numbers weren’t as lofty as they were during his time in Portland, he had the best shooting season of his career. He averaged 18 points a night while setting a new career high in field goal percentage (51.3), effective field goal percentage (52.1) and free-throw percentage (85.8).

On the other end of the floor he bolstered an already intimidating back line where he finished seventh in the league in defensive rating and ninth in defensive win shares.

Green’s value as a player has skyrocketed as a player in each of the last two seasons. He can guard all five positions, can get in the passing lanes and plays masterful weakside defense. On the other end of the floor, he can score from inside and out. He is also one of the best facilitators in the league today.

Offensively, he averaged 14 points on 49 percent shooting from the floor, including 38.8 percent from beyond the arc while handing out 7.4 assists. On defense, he finished second in Player of the Year voting after finishing sixth in defensive win shares and fourth in defensive box plus/minus while chipping in 7.8 defensive rebounds, 1.5 steals and 1.4 blocks.

Paul has been a mainstay on the NBA All-Defensive team for the last few years for his ability to guard the best opposing guards in the game. But his game is far from one-dimensional. He is one of the premier passers in the game and a great scorer.

This season, he was 10th in the league in offensive rating while averaging 19.5 points on 46.2 percent shooting while handing out 10 assists a night. Defensively, he was third in the league and steals percentage.

George’s return to stardom from a gruesome leg injury was nothing short of remarkable. Not only did he average career highs in points and assists, but also returned to form as one of the elite defenders in the game.

On offense, he averaged 23.1 points on 41.8 percent shooting from the floor and 86 percent from the free-throw line. On the other end of the floor, he finished seventh in the league with 4.8 win shares while landing in the top 10 with 1.9 steals a night.

Davis is one of the elite young players in the game today. He can score from all over the floor, dominate the glass and protect the rim. He finished ninth in the league in player efficiency rating after averaging 24.3 points on 49.3 percent shooting from the floor and 75.8 percent from the foul line.

On defense, he finished fourth in league in blocks per game (2.0), sixth in block percent and ninth in rebounds per game (10.3).

His value on offense and defense cannot be understated. He can do it all on both ends of the floor (outside of shooting the deep ball). He is an efficient scorer who can also find the open man on one end while locking down the best opposing players on the other.

Leonard is as good as the come at playing the whole 94-feet.He can shut down the others team’s best player while producing at an elite level offensively.

He won the Defensive Player of the Year for the second time in a row after finishing third in the league in defensive rating and second in defensive win shares. While not quite as impressive, he did finish seventh in the league in offensive rating and offensive wins shares after he averaged 21.2 points on 50.6 percent shooting from the floor, including 44.3 percent from 3-point range.